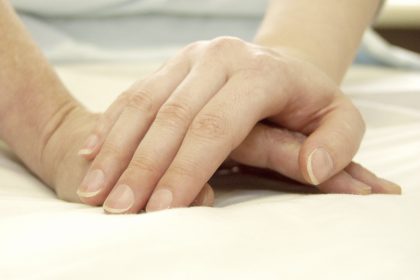 There is no need to have a fear of dying. When that last moment comes, it is free of pain and you go willingly. You are not on your own.

Your guardian angel is there with you, as are a lot of other angels.  People you love who have died before you are there too, to welcome you and reassure you that there is no need to have any fear.

Death is like birth. I know you might think that’s weird, but you are being born into a new life.

You actually don’t ‘die’, it’s only this body or shell that you leave, like an egg shell. You are much more than just a body. You are body and soul and your soul never dies.

One day I was a passenger in a car on a busy motorway. There had been a crash. It had happened only a short time beforehand, and the police and the ambulance had only just arrived. The road was wide so the police were able to allow some traffic to pass.

I looked over at one of the cars. Suddenly, it was as if I was seeing everything in slow motion.

I could see a woman in it and I knew she was dying because of what I was allowed to see.

From all sides, angels reached into her through the wreckage of the car, lifting her soul out of her body.

Other souls seemed to come rushing from all sides and I knew these were family and friends that had died previously.

I saw the smile on her face at the moment she died. I know she had seen the angels.