Everyone has a Guardian Angel 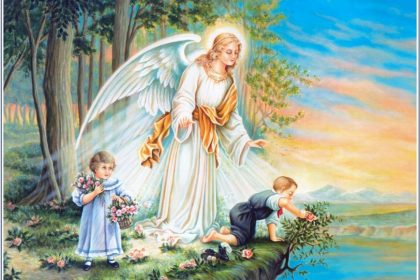 Every single person has a guardian angel regardless of their religion, nationality or the colour of their skin, even if they have no faith and don’t believe in anything. Your guardian angel is trying to help you.

It is a gift from God and it never
leaves you for one moment, from before your birth to after your death.

I see guardian angels as a light about three steps behind each person. Sometimes, a guardian angel will open this light up for me and will show me a very beautiful, perfect human appearance.

Although angels are neither male nor female, they will sometimes take on the appearance of a man or a woman. Sometimes, the guardian angels I am shown have wings, sometimes they don’t.

Your guardian angel loves you and you are precious to them – you are the most important person in the world to them and, they have to do everything they can for you.

Just before my daughter, Ruth, had her baby, I was with her in the hospital. We were in the canteen when a heavily pregnant woman walked in wearing a dressing gown and slippers.

The wings were open and wrapped around her and seemed to intertwine in front of her heavily pregnant belly as if protecting both mother and baby. I watched her as she walked around the canteen – I think she was just having a walk to stretch her legs.

I found it hard to take my eyes off her because I was so moved by the gentleness, care and love that the guardian angel was showing for her. I could still see her guardian angel moving as one with her as she walked out of the canteen.